In the rural areas of Israel, when the crops mature at harvest time, the crops in the four corners closest to the roadside must be set aside as part of the harvest. It is believed that God gave the once troubled Jewish nation its happy life today and in thanksgiving, the crops are left in the field’s corners. This will not only repay God, but those poor passers-by who have no food to eat. Sharing in gratitude is a virtue.

Similarly, in rural South Korea, at the end of the picking season in the fall, some ripe persimmons will be left on the trees by the busy farmers. The visitors will say it is a shame not to pick those big red persimmons. No matter how tempting they look however, the local farmers will not pick them because this is the magpie’s food. Why do the people have this habit? This is the magpie’s habitat and every winter they nest in the fruit trees. One cold winter there was a lot of snow. The magpies could not find food and hundreds froze to death in the night. When spring came the persimmon tree began flowering and fruiting. But then suddenly, an unknown type of caterpillar appeared and all the persimmons were eaten, because there were no magpies to eat the caterpillars.

Since then, when it is time for the persimmons to be harvested in the autumn people will leave some as the magpie’s winter food. The persimmon tree attracts many magpies during the winter. They are grateful and do not fly away even when spring has come. They are busy catching insects on the tree, thus ensuring the yearly harvest of the persimmons. In the harvest season, do not forget to leave some persimmons on the tree. Leave room for others. Everything in nature is interdependent. Giving is a joy. Giving is not a loss, but a noble harvest. Giving is a blessing that makes your mind and spirit beautiful.

On a larger scale, placemaking refers to the design and use of public space to make the most of the community’s assets and promote the health, happiness, and wellbeing of the people. When we narrow the scope down to the neighbourhoods and suburban streets, we start to look at semi-private/ semi-public space. These spaces can be created by blurring the line between your property and the public-owned road.

For example, the road, the footpath, and the nature strip in front of your home are public, and your home, front yard, and perimeter of your property are private. You can create a semi-public space by decorating the footpath and nature strip to create a sense of ownership for the people living around that space. You can create a semi-private space by opening up your front yard and driveway for use by trusted neighbours and friends. You can even make public spaces more welcoming for everyone in the neighbourhood by beautifying local parks or holding street play days on the road.

How do we do Placemaking in Living Streets?

While placemaking may seem like a big and complicated task, there are many things you can do to make a “place” out of your own street, neighbourhood, and community. There are so many little things you can do to create a welcoming sense of community that inspires a culture of meeting your neighbours, sharing resources, and connecting with one another. Read on below to see the different types of placemaking that we have trialled, and can be done by anyone in public, semi-public, and semi-private spaces!

When community members get together to beautify their public community spaces like with chalk drawings, flowerbeds, statues, and decorations, people feel welcomed to stay and mingle there. Nature strips, neighbourhood playgrounds, bushwalking paths, roads, local shops can all become gathering points for neighbours.

Fruit trees, vegetables planted on your nature strip, or community garden beds allow everyone to help take care of a space together and share the fruits of hard work.

The distinction between private front yard space and public footpaths and roads can be blurred by placing chairs and tables, barbecues, firepits, lights or shaded seating areas in the front of your house. Any piece of shared furniture that creates an inviting feeling to spaces can generate more community interaction.

Reclaiming suburban streets for children’s play is easy once you have established a culture of outdoor play on the roads and verges. Swing sets, toy libraries, trampolines, slides, street book libraries, and any other play equipment attract children onto the street to play. 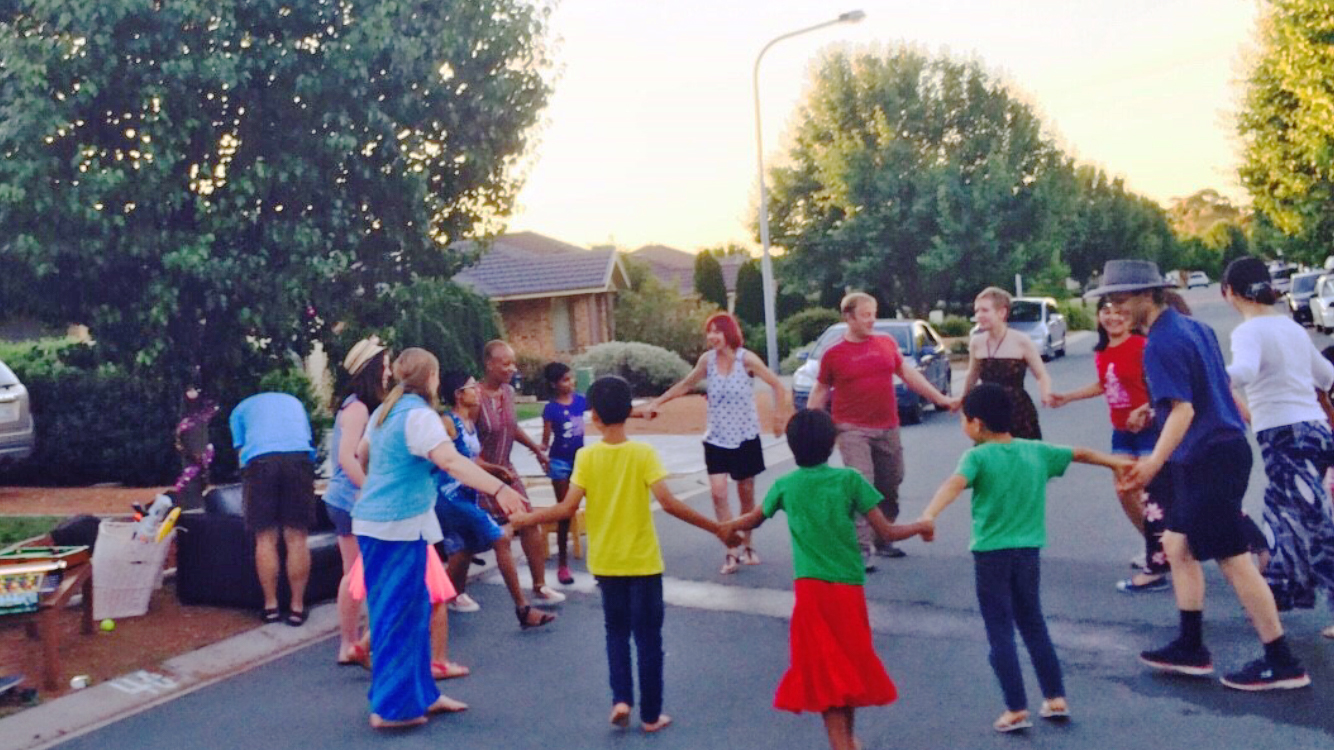 How Can I Start